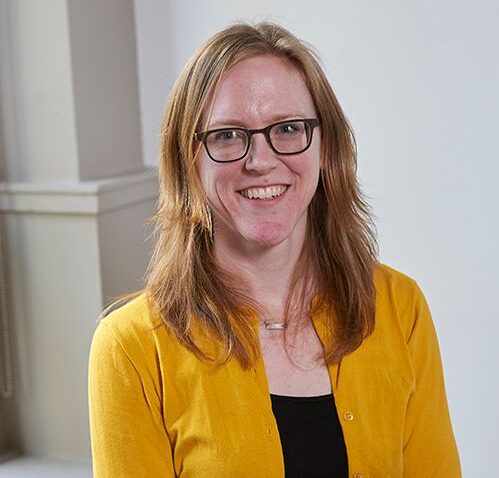 Deirdre Loughridge is a music historian who specializes in musical cultures of the eighteenth and nineteenth centuries, and in the history of music and technology. Her work engages with the history of science and media studies to illuminate music from material and multisensory perspectives. She is the author of Haydn’s Sunrise, Beethoven’s Shadow: Audiovisual Culture and the Emergence of Musical Romanticism (University of Chicago Press, 2016) and Sounding Human: Music and Machines, 1740/2020 (University of Chicago Press, forthcoming Fall 2023), and co-editor of The Science-Music Borderlands: Reckoning with the Past and Imagining the Future (MIT Press, forthcoming May 2023).

Loughridge’s first book, Haydn’s Sunrise, Beethoven’s Shadow, demonstrates how proliferating optical technologies in the 18th century fueled innovations in performance, listening practices, and ways of thinking and writing about music. The book won the 2017 Kenshur prize for outstanding monograph in eighteenth-century studies. Loughridge’s forthcoming book, Sounding Human, explores how music has been used to define the nature of, and relationships between humans and machines in the eighteenth century and today. The Science-Music Borderlands, co-edited with Elizabeth Margulis and Psyche Loui, brings together neuroscientists, cognitive scientists, musicians, historical musicologists, and ethnomusicologists with an aim of fostering the kind of dialogue through which researchers across these fields can mutually benefit from one another’s perspectives and recent developments. Loughridge’s numerous research articles and reviews have appeared in such publications as the Journal of Musicology, Eighteenth-Century Music, Journal of the Royal Musical Association, Cambridge Opera Journal, Early Music, and other musicological journals and edited volumes.

Loughridge also writes for broad audiences, bringing a historical perspective to contemporary issues. Her essays have appeared in such publications as Even Magazine and Art or Sound (Fondazione Prada). She is also co-founder and curator, with Thomas Patteson, of the Museum of Imaginary Musical Instruments, a web-based project that has been featured in the Public Domain Review, and in a gallery exhibit at the San Francisco Center for New Music.

Loughridge’s work has been supported by fellowships from the Mellon Foundation, the American Council of Learned Societies, and the Institute for Advanced Studies in Princeton, NJ. She received her B.A. from the University of Chicago (in music and biology/neuroscience), and Ph.D. in music history from the University of Pennsylvania. Before coming to Northeastern, she taught at the University of California, Berkeley. Loughridge is also a cellist whose playing can be heard on various albums, including by The Wiggly Tendrils and her chamber-pop band Deirdre & Conor. Artificial Intelligence is here in our entertainment. What does that mean for the future of the Arts?